A post from my favorite writer:  Stephen Bodio about Frank Bond:

The scion of a wealthy sheep -ranching family in northern New Mexico, one that once held the grazing leases in Valles Caldera, he grew up in Espanola, and spoke Spanish as well as he spoke English. He attended school at Governor Dummer Academy in Massachusetts and Colorado College before getting a Master's in Spanish at the University of Arizona and a law degree at UNM. With Jim Weaver, who later came to live, ranch,  and fly falcons in eastern New Mexico, Dr Tom Cade of Cornell, who was born here down near the Bootheel, and Bob Berry, then of Philadelphia but now in Wyoming, he founded the Peregrine Fund, which then built the breeding barns at Cornell. Those became the first mass breeding facilities in the world, run by Jim. The Cornell quonset huts were the "factory" that fueled the restoration of the species in the lower 48, an effort manned for years entirely by falconers, who gave up their summer time and amenities to babysit birds in places ranging from urban to remote. (They didnot "bring it back from extinction", as the ignorant often say, though they did just that with the Mauritius kestrel). Those that scorn the Fund's deliberately mixed- gene hack birds as Cornell chickens are probably jaded by seeing the now- common birds in eastern cities; without Cornell and the P- Fund  barns we might still have only the Colorado plateau birds and a few southern "Peale's" birds on the coast of Washington breeding in our entire country south of Alaska.

I honestly thought Frank might be the one to provide the bridge between nuevo "Green" enviros and old school ranchers, hunters, and game biologist types, and when he ran for governor on the Republican ticket in 1990, I not only supported him but worked for and with him in Socorro and Catron counties (later I will post about one hilarious incident on the campaign trail). He was a rancher, a founder of the P- Fund, and a long- time trustee of Alan Savory's Holistic Range Management group, whose intense short- term grazing and constant movement can revive desperately overgrazed, "ruined" land. He was both an early supporter of project Lighthawk and a connoisseur of fine guns who hunted big game in Africa. He loved his Gyrfalcons more than any other birds, but was also a serious pigeon racer; his loft was designed by an architect after some adobe structures he had seen in Spain. He offered me the plans once, but I had a feeling they would cost me as much as my (granted tiny, 4 room), house to build, so I thanked him and regretfully declined. He attended race meetings  where there were few Anglos and probably no other rich men.

When he lost by not too much to his friend (and ranch lessee!) Bruce King, a genial old - fashioned hand- shaking pol who never forgot a face but was alleged to have referred to a roadrunner on his desk as "that ol woodpecker",  I realized that today's divisions had begun. When the Sierra Club deserted an eminent conservationist for a Democrat who never saw a cow he didn't like or a bird he could identify, my in- laws quit an organization they had belonged to for over fifty years. Frank devoted the rest of his life to law and conservation, especially to international bird of prey issues. He himself never paid undue attention to partisanship; my lawyer friend Jessica Abberly, a lifelong Democrat, emailed me that he was "...one of the last true gentleman attorneys out there, by the way."

I used to spend a lot of time with him and his then wife in Santa Fe, a time that included my early days with Libby, but time and space and the human realities of loss, breakup, rearing kids, kids leaving, travel and distance all contributed to our not having spent much time together in the last few years, and I realized when I heard that he was ill that I had not seen him but once in the last two years, and that for only a hurried handshake . I wrote to him of the campaign incident, hoping to raise a smile, and then he was gone.

He will be missed. The Peregrine Fund  continues to work with rare species like the Phillipine eagle and the orange- breasted falcon, and is playing a big part in trying to reverse the dire population crashes of Old World vultures, first in India and coming in Africa. Frank himself had moved on to working for the International Association for Falconry and Birds of Prey, where he served as president; when you see films of their meetings in the Czech Republic or the Emirates, you often see his silver belly Stetson hat, the only one present. His importance as a conservationist and a diplomat serving both nature and our sport can hardly be exaggerated.

But he was a private man for all that, and my best memories of him are of sitting around a large living room with the Havell Audubon print of life- sized black Gyrs and the original Reid- Henry painting of white Gyr head studies, telling stories. Some of us will always miss that unassuming, hospitable, soft- spoken friend, a fortunate  man who always gave more than he got,  and one who spoke as easily and with as much interest to his homeboys in Espanola as he did to international figures. 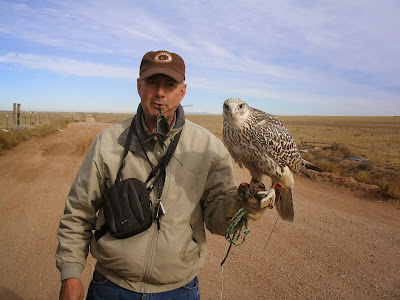 Here is another good article about Frank Bond who selflessly campaigned for peregrines and falconry.
http://www.santafenewmexican.com/news/local_news/frank-bond---most-passionate-fight-for-attorney-lawmaker/article_1d0d04b4-73be-588d-8311-2cda9ec757eb.html
Posted by Karen Carroll at 11:30 AM No comments:

The passing of one of the founders of the Peregrine Fund.   Frank Bond.   Likely there would be few if any peregrines left without his expertise and passion for falconry.

Posted by Karen Carroll at 5:45 PM No comments:

A falconer in Arkansas is enjoying flying his newly trapped Tundra Peregrine.

http://www.nafex.net/showthread.php?t=18733&highlight=arkansas+peregrine
Posted by Karen Carroll at 1:15 PM No comments:

One of the most famous wild peregrines is being watched through her entire life with migration/gps studies:  See here. http://www.frg.org/track_pefa12.htm
Posted by Karen Carroll at 9:13 AM No comments:

Posted by Karen Carroll at 5:53 AM No comments: 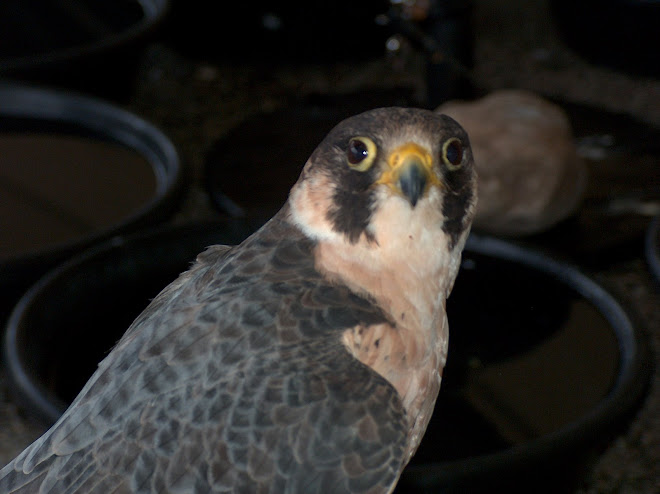 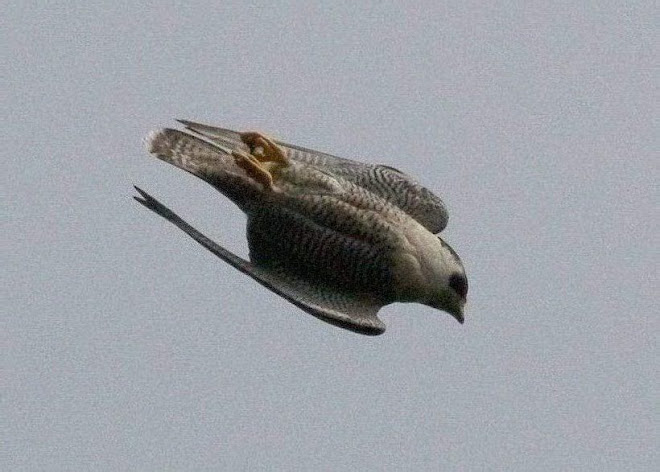